Mortgages and Housing Market in a Rising Rate Environment

Over the last few years, the Canadian Housing Market has increased significantly and many Canadians have locking into all-time low mortgage rates. As rates rise over the coming two years, there will be a profound impact on your personal finances base

Mortgages and Housing Market in a Rising Rate Environment

Over the last few years, the Canadian Housing Market has increased significantly and many Canadians have locking into all-time low mortgage rates. As rates rise over the coming two years, there will be a profound impact on your personal finances based on whether you choose a Fixed or Variable mortgage, and as rates rise, this historically high housing prices may hit a wall as the market is forced to re-price higher mortgage rates and higher payments. This blog post written by Douglas Porter, CFA and Robert Kavcic of BMO Economic outlines the pro and cons of Fixed and Variable mortgages and the potential knock-on effect on housing prices.

Mortgages: Should I Stay (Fixed), or Should I Go (Variable)?

Canadians have been moving sharply into variable-rate mortgages this year, at least relative to historical norms. By the summer, more than 50% of new mortgage lending (including refinancing) was done at a variable rate, the first time that threshold has been cracked since data began in 2013 (Chart 3). Compare that to 22% of outstanding mortgage balances tied to variable. There are likely two key reasons behind this uncharacteristic move. First, the interest rate differential between fixed and variable began to widen early this year, after coming into 2021 at a very tight spread. While everyone’s experience will vary, Bank of Canada data show that variable lending is currently being extended around the 1.5% range, while fixed now sits around the 2.3% mark. In a very tight housing market with stretched valuations, that differential is getting leaned on by buyers to get in the market and meet affordability criteria. 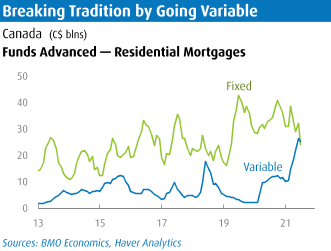 Meantime, Bank of Canada messaging that interest rates will remain onhold until the economy has reached full capacity (i.e., a  long, long time in the eyes of the public), even in the face of an extremely hot  housing market and heated inflation, has likely aided the riskier psychology.

Suffice it to say, the age-old question of whether to lock into a longer-term fixed mortgage rate or stay in a variable rate has become an increasingly complex and important issue recently, with short-term rates at extreme lows and pressure building quickly for higher rates in the year ahead. Historically, there is little debate which has been the better option: Typically, borrowers save money by staying in variable products, and riding the rollercoaster of fluctuating rates. In fact, fully 70% of the time since 1975, the cost-effective route for borrowers was to stay variable.

However, there are a number of important caveats to point out:

The Case for Staying Fixed

A conventional fixed-rate mortgage can mitigate a number of risks. The inflation flare-up could force the Bank of Canada to raise interest rates aggressively, driving variable mortgage rates higher, but leaving fixed-rate choosers unscathed. Considering the likely upward trend in interest rates, this may be a rare period when a fixed-rate turns out to be the superior choice. Further illustrating the potential rationale for going fixed is the near record low “real” 5-year rate. Finally, a fixed rate offers certainty and piece of mind in what could be a volatile period ahead for interest rates.

The Case for Going Variable

The clearest advantage to a variable rate mortgage is that it has been consistently less costly than its conventional counterpart over time, save for a few occasions in modern history. The strong Canadian dollar should help restrain inflation, and limit the BoC’s most aggressive urges. There is also some risk to locking in as fixed rates could fall if the economy badly underperforms, raising potential penalties if the borrower is compelled to pay the mortgage early. Finally, even as rates start to rise, one can always lock into a fixed rate at a later date.

The verdict: The decision depends on the individual. For those who don’t have a lot of financial flexibility, and would run into difficulty from a pronounced upswing in interest rates (typically first-time buyers), the extra cost for peace of mind may be a price worth paying. And this is clearly one of those rare times when fixed rates may prove to be a cheaper alternative.

One potential issue is that the market has now fully priced itself based on mid-1% mortgage rates, but it’s beginning to look like a one-way trip higher for both fixed and variable. Five-year fixed rates, while already up from their lows, likely have more room to move given the recent move in five-year GoC yields (Chart 4). Given our current outlook for yields, we could see five-year fixed mortgage rates push toward 3.5% by the end of 2023. Meantime, with variable rates tied to the BoC’s overnight rate, upward moves are likely starting next year, and could ultimately move toward 3%. 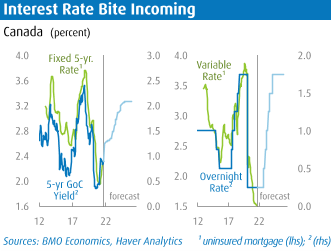 With housing valuations already lofty versus income and interest rates, and the latter poised to move up, strong price gains could soon be running into a wall. Recall that the excessively strong 2015-to-2017 market, while also tripped up by provincial tax measures, was ultimately cooled by Bank of Canada tightening. Chart 5 shows a basic valuation model that accounts for home prices, mortgage rates and household income. Even at recent low mortgage rates, Canada-wide valuations on this basis are already stretched beyond the highs seen in 2016 and 2006, though still below the early-1990s extremes.

​If mortgage rates move up in-line with our forecast, to about 3% on average by the end of 2023, that could very well be the catalyst for a flattening in prices, if not a modest 2017-like correction in some supercharged markets. If we see a larger or faster move, we reach much more uncomfortable terrain. The key takeaway here, as we began to argue earlier in this cycle, is that the longer home prices are allowed to run at excessive rates (and they are still running 15%-to-20% a.r., not steady as built into this model), the more payback that will have to be done on the back end. 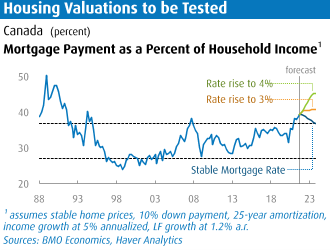 To be sure, while the asset price side of the market might be in for a letdown in the coming few years, the risk of defaults and vacancies having a wider-ranging economic and market impact is still extremely low, even as we’ve seen more high-ratio mortgages taken on at a sub-2% rate. Qualification and income verification criteria are still robust. At the same time, OSFI’s stress-test rules have insulated the market by ensuring capacity to repay at mortgage rates that we still don’t expect even in our most bearish scenario above (qualification during the pandemic surge has been done in the 4.79%-to-5.25% range, with OSFI tightening to the latter rate for uninsured mortgages in June). Finally, income, employment and broader economicfundamentals remain very supportive at this stage.

Mortgage choices are always a personal financial-planning decision, but there is a real risk that rates will begin to move up sooner than most have assumed. This will also prove to be a test for what is now still a superheated housing market.